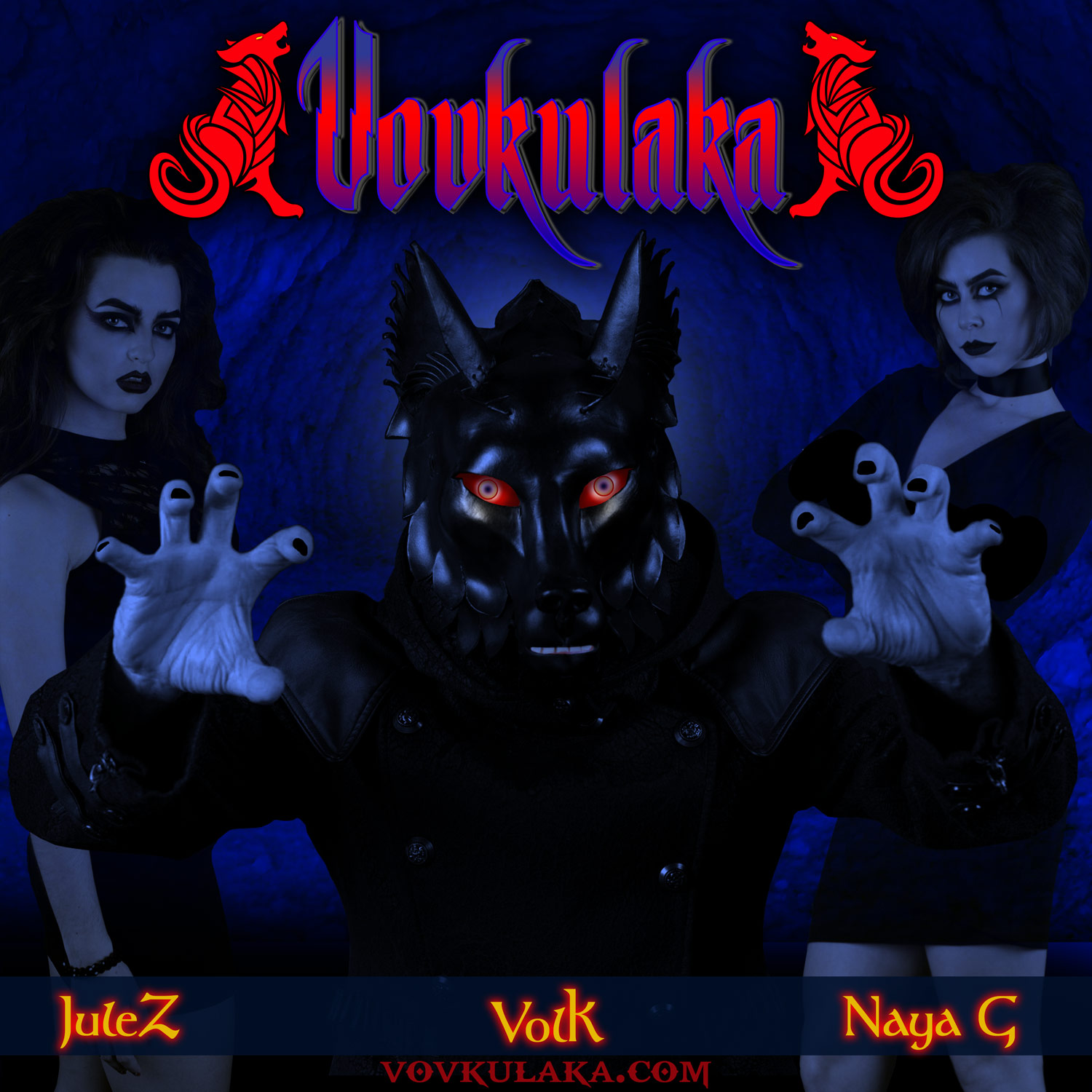 Get ready Head Bangers here comes some Dark Angry Evil Metal from the Ukraine, and I’m not holding back, their story alone would make a great movie.

Let’s start with a great song, love this:   “My Devil”

This Bio was written for all Head Bangers by the Supernatural Sage VolK.  It’s longer than the usual bio, but it’s so PERKELE interesting I couldn’t take any out:

There was an icy feeling in the studio that day as singer-drummer-songwriter VolK was recording. The leader of the morbidly mystical metal band Vovkulaka is also known as a supernatural sage. Upon careful investigation, he found he was channeling the ghost of a key maker that had died in the room adjoining the studio, thus, solving the mystery of a pile of keys left behind in the property. Welcome to one dark entry in an occult metal life.  We’re not Satanists-we’re a metal band-but I have a cred,” VolK says.  “I investigate haunted palces all over the world and invite the evil in.

“With a tagline #painneversoundedsogood, a deep commitment to exploring paranormal activity, and a catalog of brutally catchy songs, Vovkulaka is adding an infectiously visceral injection of evil enlightenment to modern metal.

Ghost hunting informs Vovkulaka’s (Ukrainian for werewolf) lyrical content, and VolK (Russian for werewolf) shares his fascinating paranormal experiences via the band’s Facebook page. In addition to his connection to this other realm, VolK also explores personal hauntings such as caustic relationships, inner demons, and the negative voices we all hear in our head.

Vovkulaka’s darkly cathartic metal also conjures tribal spirituality, dubstep, goth, industrial, and a myriad of permeations of thrash and nu-metal. Other aesthetic signposts include the rhythmic onslaught of Slipknot, the engaging spectacle of Babymetal, and the crushing groove metal of artists like Korn, Pantera, and Rob Zombie.

Onstage, Vovkulaka is something of a twisted carnival with VolK as the ringleader, conjuring the chilling masked imagery of Pinhead from Hellraiser while being flanked by stunning dancers Naya G and JuleZ deeply attuned to his beastly rhythms. This profound connection evokes the ancient tribal history of the “the drummer and the dancer.” Joining the three is brutally gifted Ivan Manoloff on guitar. The quartet’s lush and gritty sound is filled out by triggers.

Vovkulaka first made a seismic impact with its debut single, “Glory to the Heroes,” featuring Keith Lynch on Guitar (Bill Ward Band, Ozzy Osbourne), is a modern metal anthem bursting with ear-candy musical motifs, a rousing chorus, and touches of nu-metal swagger. The song was dedicated to Ukrainian soldier Nadiya Savchenko (jailed in Russia but released in May 2016). “Glory to the Heroes” was gifted to the Ukrainian people as a gesture of empowerment and freedom. Currently, the song is also being played in France, Russia, and the United States. In addition to this showing of patriotic devotion, Vovkulaka also recorded a metal version of the “Ukrainian National Anthem.”

Here it is Head Bangers listen:   “Glory to the Heroes”

Other Vovkulaka classic tracks include the band’s second single, “My Devil,” and “Defy.” “My Devil” entrances with intricate power metal grooves, vocals that vacillate between guttural roars and soulful singing, and a dubstep solo by DJ Gigantor from the band Evol Intent. Here, the demonic haunting comes courtesy of a toxic past relationship. Razor-sharp syncopation rules the industrial pummel of “Defy.”

Standouts from Vovkulaka’s most recent breakthrough studio sessions include “Darkness Calling,” “Cemetery Voices,” and “The Purple Door.” “Cemetery Voices” opens ominously with funeral bells and charges forward with a white-knuckle thrash ride punctuated by sludge metal and gritty industrial ambience. The track is a journey into the negative voices in our head.

The tale of Vovkulaka dates back to a trip to the Ukraine where VolK’s interest in mysticism spurred him on to investigate a fort from the 1600th century. The location was the site of heinous torture, and the spirit of a Polish princess killed there haunts the ancient location to this day. During this visit, VolK had a song epiphany themed around the colors of the Ukraine flag. At the time, the political climate was reaching a boiling point. Fired up, VolK wrote the opening salvo of what would become his life’s work: Ukraine-based and paranormal-themed malicious metal. Upon his return to United States, VolK began his working relationship with iconic producer Darian Rundall, and his studio association with fleet-fingered guitarist Stone from the metal band Contortion.

Up next, Vovkulaka will storm the Ukraine and Europe with its mesmerizingly morbid live show, touring, playing one-off shows, and making festival appearances. VolK, a man of few words, says in closing: “I have cut off all ties with everyone, quit everything, and sold all of my possessions to dedicate myself to Vovkulaka. This is my everything.”

Well my Head Bangers if you don’t find anything interesting with this group I don’t know what to say.  I love the music, and there are a lot more songs on Utube.   But their story is what grabs me.  I know every band has a different story, but as a paranormal lover this one really interested me.  But you know what I always say, what speaks to me may not speak to you.  But that all being said, I love this band and look forward to hearing more from them.  They definitely bring the fire

Well my Head Bangers that’s it for this week, join me next week for another band and another song, and remember don’t stand to close to the fire if you can’t handle the burn…..