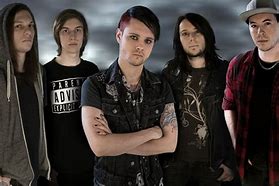 – Third single release from the album “Sting”– “Squeezed Lemon”, as well as the accompanying music video will be released on September 13, 2019– Mastered by Joey Sturgis (eg Asking Alexandria)

The German emo-rock / post-hardcore band THE EDGE OF REASON will release their second full-length album “Sting” on October 25, 2019, which will be released on STF-Records.

With their debut album BROKEN BUT NOT TORN, the band built a steadily growing fan and follower community.  The Singles RIVER and COME TRUE from the upcoming album STING reached #40 and #37 in the iTunes rock charts. The music video for COME TRUE is scratching the mark of 50,000 views on Youtube.

The new single can already be presaved Spotify and subscribed to the premiere on Youtube. All common digital channels will follow shortly.

“Squeezed Lemon”, as well as the upcoming album were again produced and mixed by Johannes Wenisch in the ROOM4 studio. However, this album and single are mastered by none other than Joey Sturgis, who has already done some magic on the sound for bands like Asking Alexandria or I See Stars.

More information about the band on teor.de/epk

This band is different than my usual, but there is something about them that always takes me to them.  I first did TEOR back in January 12, Week 13.  Big shout out to the guys and RO.  They always let me know when something new is on the horizon and I get to hear it before you HeadBangers do.  They work non stop and are constantly coming up with new material.  Everyone check them out, they are worth it.  Love you guys for always thinking of me, it is very appreciated.

Fans who want to pre-listen should sign up for our insider at teor.de/insider. they will receive a link then.