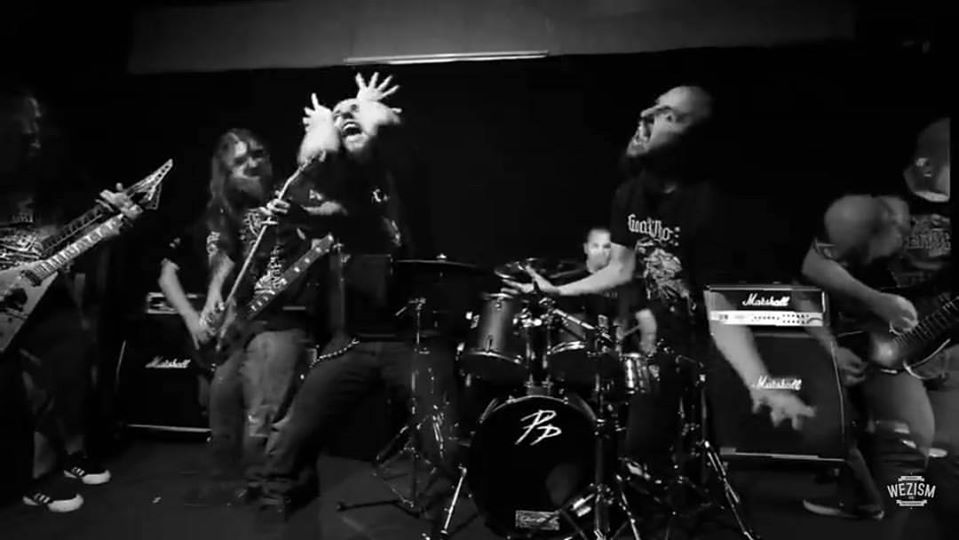 Your help is appreciated

My HeadBangers, welcome from West Midlands, UK, the dark and brutal metal band:  ASHEN CROWN
“Unbroken Faith”
This is their Demo from 2017, gives me chills HeadBangers
Let’s meet the band:

Here’s some Bio on the band taken from their site:

Formed in late 2016, Ashen Crown are a Midlands based Metal band with a style that draws influence from many of Metal’s sub-genres. Most notable influences to the Ashen Crown sound are; Bolt Thrower, At the Gates, Benediction, Pantera, Sylosis, Gojira, Slayer, Obituary and early 90’s Sepultura.

With a Strong set of material, the band took to stage for their successful live debut early March 2017. Two weeks later the band began their Wolverhampton, Metal to the Masses campaign, progressing to and winning the Grand – Final in late May 2017. Ashen Crown then delivered a hugely successful major-festival-debut, laying waste to a packed-out New Blood Stage at Bloodstock Festival 2017, thereby cementing them in the ranks of the Bloodstock Alumni. Gaining a reputation for an aggressive, energetic live show and earning respect from peers and promoters, the band have since gone on to guest at regional M2tM events, support the likes of King Parrot, Memoriam and Obituary… not to mention a string of very successful headline shows. This has no doubt helped secure slots on prestigious UK festivals such as Hammerfest, Uprising, HRH Metal Meltdown, Manor-Fest and Amplified. Delivering hard hitting tracks, filled with raw energy, the band certainly pride themselves on getting the pit well and truly moving wherever they play!

After working with Fat Angel Management at Bloodstock 2017, Ashen Crown teamed up with them once again in October 2018 for bookings an PR. This has proven to be a successful move which has helped push them on to greater things within the metal community. However, this wasn’t the only change for the band around this time, as founding member / Drummer Chris McGrath, stepped down from the AC drum throne, plunging the band into a cloud of uncertainty. After advertising for a replacement, one candidate stood out head and shoulders above the rest… Mike Ellis (former As The Sky Burned / Whispering Vault) was a perfect fit and after an impressive audition secured the AC drum throne.

Ashen Crown’s initial releases have been well received earning Radio / Podcast play across the UK, Europe and USA, with the debut single / video “Fall of Thine Eyes” being released to great reception in March 2018. However, a full release was long overdue. With a full album pretty much ready to go, Ashen Crown have been extremely busy throughout 2019 recording and finalising their debut album – “Obsolescence” (due for release 1/11/2019). Recorded with Neil Hudson of Krysthla at Initiate Audio and Media, the new album signifies the start of a new chapter for Ashen Crown..

My thoughts:
Here’s a little something I found out about their home town.  West Midlands is also know for it’s universities, colleges, and cultural institutions, but it is best known for its manufacturers, ranging from the luxurious Rover cars from Solihull, to the everday chocolate and cocoa from Cadbury’s model workers’ settlement at Bournville.  Well I for one will never listen to Ashen Crown again and not think of chocolate and I love chocolate.   They’re a relatively new band but their sound and those growl vocals are on point as far as I’m concerned.  Check out their FaceBook page and you will see that these guys work their asses off one gig to the next and have alot already coming up in 2020.  Which is proof that if you love doing something and stick to it through all ups and downs it will pay off in the end.  It does require sacrifice and hard work, some people don’t understand that and may not be able to deal with it, but that is the price you pay my HeadBangers.
Well that’s it for this week my HeadBangers.  Join me next week for another band and another song.  Until then don’t stand to close to the fire it you can’t handle the burn…..