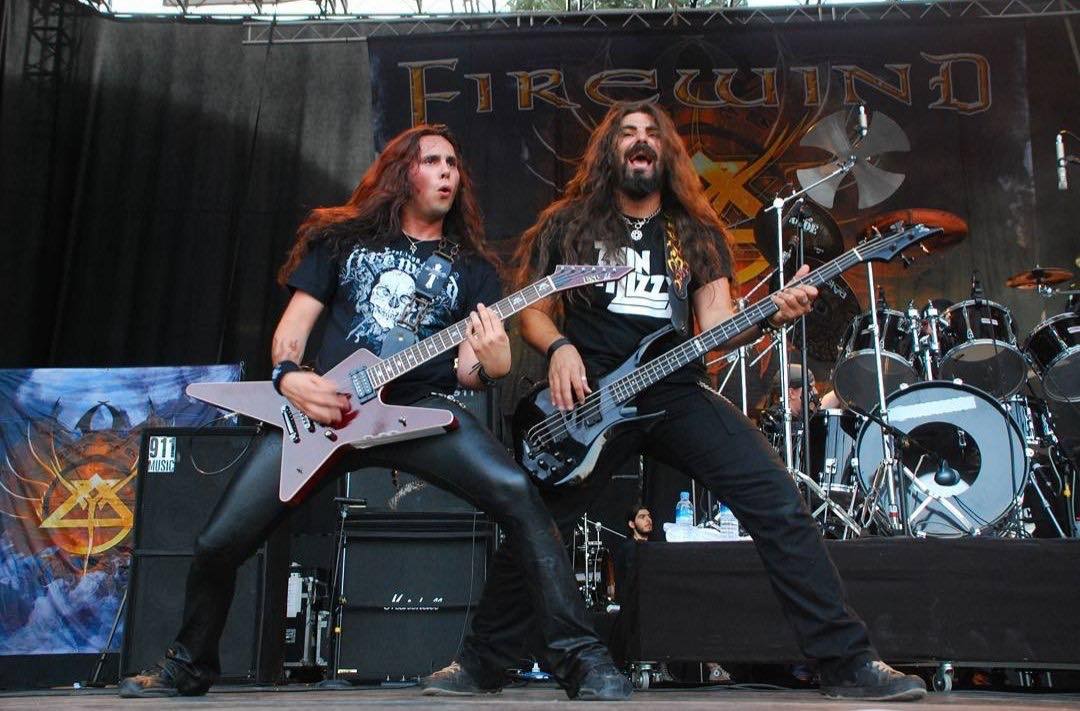 Welcome my HeadBangers, from Thessaloniki, Greece, the power/heavy metal band:

“Welcome To The Empire”

I am going right to the bio HeadBangers, you know how I am with a band that has history, and this is one of them:

Firewind is a Greek power/heavy metal band. Formed in 1998, the group is currently signed to Century Media Records and was originally a small project created by guitarist Gus G. to showcase his demo, Nocturnal Symphony in 1998. Firewind later became a full band over three years later when they recorded their debut album, Between Heaven and Hell. To date, the band has released nine studio albums and has been met with international success.

The band began in 1998 when the young Greek Gus G. decided to record a demo on a 4-track recorder with some close musician friends in the United States as Gus “briefly attended Berklee College of Music in Boston”. The project was entitled Firewind, and was used as a showcase for Gus’ guitar skills in an attempt to earn a professional recording deal. Gus G. was quoted as saying, “Firewind, the second Electric Sun album, that’s where I got the band name from. “R.Y.A.N. – Season2, Episode 4:  Gus G. The demo attracted the attention of Leviathan Records, but activity was put on hold when Gus was hired by Nightrage, Dream Evil,  and Mystic Prophecy.

After the release of his other bands’ debut albums, Gus’ attention returned to the Firewind project. Only he remained from the original formation – Leviathan owner David T. Castain brought in Vocalist Stephen Fredrick and drummer Brian Harris (both formerly of Kenziner), while Gus enlisted the help of bassist Konstantine. This line-up recorded the debut album Between Heaven and Hell. 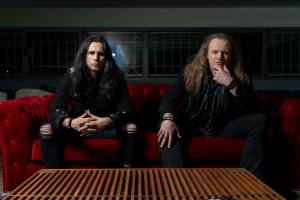 In 2003, new changes were instituted as drummer Stian Kristoffersen and bassist Petros Christo joined the band. Harris and Konstantine had been replaced as Gus was looking for a more permanent rhythm section that was prepared to tour. This lineup recorded Burning Earth and went on a tour of Japan with Rob Rock, but without vocalist Fredrick, who was not prepared to go on the road (despite prior guarantees to the contrary). At their October 2007 show at ProgPower USA, the band briefly reunited with Fredrick for a few songs off their first two albums.

Fredrick’s replacement on the Burning the Earth Tour, singer Chitral “Chity” Somapala, was given the job full-time. Fellow touring member Bob Katsionis was also hired permanently to play keyboards. Firewind got a worldwide deal with Century Media by the end of that year.

A few months after Forged By Fire was released, Chitral left due to personal and musical differences with the rest of the band. When his replacement, Apollo Papathanasio (of Time Requiem), was found, it was also announced that Kristoffersen would be leaving, to be replaced by British drummer Mark Cross. The reason for the split was that Gus wanted to have a set of Greek-based musicians willing to make Firewind their number one priority (probably to end the virtual revolving door of members) and Stian’s main band was the Norwegian outfit Pagan’s Mind. Gus also left his roles in Dream Evil, Mystic Prophecy and Nightrage.

Between 2004 and 2006, the band recorded Allegiance, which was released in July 2006. From November to December 2006, they toured the UK supporting DragonForce with All That Remains. Firewind accomplished their 2006/2007 world tour in Copenhagen at the Scandinavian Prog Power festival on November 10. The band went around the globe almost twice being on three continents including Asia, Africa, North America and Europe and played nearly 100 shows. The band went to Sweden to record The Premonition, which was released in 2008.

In November 2008, the band released their first DVD, Live Premonition, containing footage of their entire concert at their home town in Greece on January 12 of that year. The band toured with Stratovarius (One of my favorites HeadBangers) in the UK during May 2009. During this tour, they added two new songs to their setlist, “Losing Faith” and “Days of No Trust”. “Losing Faith”, which contains a line in the chorus “in the days of no trust”, was eventually to appear on 2009’s Days of Defiance. In 2010 Firewind appeared in Issue 3 of the Eternal Descent Comic Book series. The narrative was inspired by lyrics from ‘Angels Forgive Me’ featured on ‘The Premonition’.

At the end of September 2009, Firewind began work on their sixth studio album, the band confirmed that they have written twelve vocal and two instrumental songs.

On January 13, 2010, Firewind announced that they were parting ways with drummer Mark Cross (Tower of Babel, God’s Army), with Michael Ehré (Uli Jon Roth, Metalium, Kee Marcello) playing at the live Mexico shows. Those shows, however, were cancelled. On May 7, the band recorded a cover of Judas Priest’s “Breaking the Law” for a compilation CD by the magazine Metal Hammer. On May 26, Firewind announced the name of their new album as Days of Defiance and confirmed Michael Ehré as a full-time member although Mark Cross had recorded all drums on the album.

On August 6, 2010, they confirmed an October release date for their sixth studio album Days of Defiance, and an August release date for the album’s first single “World on Fire”. On the weekend of August 20–22, Gus G guest appeared on the radio show Full Metal Jackie where he premièred a second song from the album, titled “Embrace the Sun”.

Almost a year after the release of Days of Defiance, Firewind did a European headlining tour, with Mats Leven as a replacement for Apollo who couldn’t make the European leg of the tour and a US headlining tour. Gus has said in an interview that Firewind will probably do a South America (this never happened) tour after the US tour and than enter the studio for a new album. Also has Michael Ehré left Firewind and Johan Nunez of Nightrage replaced him on the tours and now is a full member of the band. 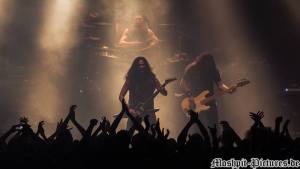 Johan Nunez joined the session for the seventh studio album as drummer in Valve Studio in Greece.

Firewind debuted two songs, “Wall Of Sound” and “Losing My Mind”, from their seventh studio album at headlining shows in Greece. The band has been confirmed for the Summer Breeze Festival and the Masters Of Rock festival. In early 2012, Firewind and Century Media have announced that Firewind has re-signed with the label and that they will be releasing the new album titled “Few Against Many” May 21 in Europe and May 22 in North America. Also Firewind’s second album will be re-released throughout Japan with 2 bonus tracks in February 2012. The band was confirmed to perform at the Download Festival in June 2012.

On September 5, 2012, Firewind released a music video entitled “Edge of a Dream” that features Apocalyptica. It was taken from their Few Against Many album released by Century Media Records earlier that year. Later in September 2012, Firewind announced that they would play four anniversary live shows in Greece in December (counting from the release date of Between Heaven and Hell), to celebrate their 10 years of existence. The shows took place on December 15 and 16 in Thessaloniki, and on December 20 and 21 in Athens. The band played different set lists each night in each city. The shows, as the band repeatedly announced were recorded for a live cd release in 2013. Anniversary merchandise was also sold at the venues. On January 15, 2013 Firewind announced that vocalist Apollo Papathanasio had quit the band due to not being able to keep up with the band’s touring and promotion schedule.

On January 15, 2013, the band announced that Kelly Sundown Carpenter (Adagio, Beyond Twilight, Outworld, Darkology) would replace Apollo Papathanasio on vocals for their 2013 North American Tour. During an interview in June 2013 with Metal Shock Finland’s Blackdiamond, Gus mentioned Kelly as a fantastic singer and also he stated that they have no plans to record a new studio album yet.

In July 2016, Firewind entered the studio to begin recording a new album. In November 2016, it was announced that the album, titled Immortals, had been completed and would be released on January 20, 2017. On November 25, the band released the first single from this album, entitled “Hands of Time”.

In May 2019, it was announced by Gus G. that they will enter the studio to start working on a follow-up to Immortals in August of that year. However, on 9 March 2020, it was announced that Bob Katsionis will be leaving the band in order to focus on his studio work and his other projects. They also parted ways with singer Henning Basse, because of personal reasons, which may prevent him from continuing with the band, with Herbie Langhans, who worked with Sinbreed and Avantasia, replacing Basse on vocals. They also announced that the next album (with vocals finished by Langhans) will be released in 2020. On 20 March 2020, the band premiered a new single, “Rising Fire”, which is included on the band’s self-titled album, released on 15 May 2020. 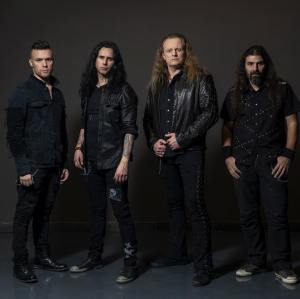 I love this song and the movie even more.  I’m sure most of you should be familiar with the 300 Spartans.  King Leonidas was their leader at that time.  It is true there were only 300 Spartan soldiers at the Battle of Thermopylae but they were not alone, as the Spartans had formed an alliance with other Greek states. It is thought that the number of Greeks was closer to 7,000. The size of the Persian army is disputed.  I love this part of history.  They were fighting for their freedom and the freedom of all their people.  Maybe we could take a lesson from them.

“Live and Die by the Sword”

Well my HeadBangers, I have found another Band that calls to me like a moth to the flame.  I love their songs, the beat of the music runs up my arms and down my spine, I’m totally hooked.   They have been through their ups and downs with the changing of band members.  But since 1998, Gus G. kept going and here they are still playing and playing strong.  Greece has given us several bands, they are all on the blog, Aetherian, Suicidal Angels, and Ghost Season to name a few.  There is something about the sound of the music in these Greek Bands.  I have talked about this before, it’s hard to explain.  If you listen to the music of different countries you will eventually be able to tell where they are from just by their sound.  It’s more than just listening to the music, it’s studying the music, the band.  It takes time but you will get there, I did.  In the meantime, sit back, and relax and breathe in the sound of Firewind.  They will be here for along time, these spartan warriors from Greece.  I love them.

That’s it for this week HeadBangers.  Join me next week for another band and another song.  In the meantime don’t stand to close to the fire if you can’t handle the burn….. 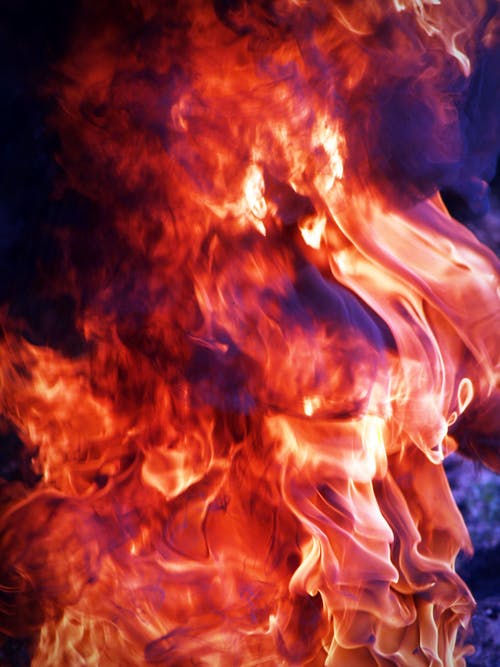